Even the most high-tech automobile is, at its core, a machine. And machines break sooner or later, sending most owners into a dealership or independent garage for service. But lately, and no pun intended, there’s a wrench in the works: a shortage of qualified mechanics. This comes just as the proliferation of electronic controls for the engine, suspension, steering, brakes, and nearly everything else has made already complicated motor vehicles even more so.

The United States Bureau of Labor Statistics says an average of 76,000 mechanics are needed each year between 2016 and 2026, both to replace those retiring or leaving the industry and to fill some 46,000 projected new openings. Employment in the field dropped by 10 percent during the Great Recession, bottoming out at 587,510 jobs in 2010. It has only recently come close to its 2007 level, with 647,380 mechanics employed in 2016, according to the BLS. Today, Americans are driving a larger vehicle fleet more miles than ever as mechanical and electronic complexity have outpaced improved vehicle reliability. The result is a labor shortage that has increased workloads among existing automotive technicians and is leading to more hassles for customers.

The challenges facing the industry are numerous. Although pay can be competitive after a few years of turning wrenches and reading diagnostic scanners, the job requires a deep commitment to learning the necessary mechanical and digital skills. The tools of the trade are expensive. Plus, enticing today’s tech-oriented youth into a profession that requires getting their hands dirty can be difficult.

“We’re working around a bit of a culture shift from years ago,” says Gary Uyematsu, national technical training manager at BMW of North America. “It used to be that people would work in a lawn-mower-repair or tire shop, but there’s not so much of that anymore. Years ago, if you worked at a gas station, you changed oil and worked with cars. Now, you sell candy and chips.”

BMW’s New Jersey training center is reflective of the changes in the industry. Housed in a sprawling complex in the forested suburbs north of New York City, its long, high-ceilinged gallery is flanked by several pristine classrooms, each with a small seating area at the back of a large service bay. At one end sits a spotless, state-of-the-art paint and body shop, its walls a brilliant white. Instructors work with anywhere from six to 12 students in almost lab-clean classrooms, and they’re generally more focused on computer equipment than greasy mechanical parts.

Stakes are high for BMW and other carmakers, as service departments are big moneymakers for dealerships. According to a recent report from the National Automobile Dealers Association, service and parts brought in about $110 billion in 2016—nearly 12 percent of dealers’ total revenue. A dearth of qualified technicians imperils dealerships’ satisfaction ratings and revenues, as customers often have difficulty securing appointments and need to endure longer wait times, according to BMW.

To address the tech shortage, schools, manufacturers, and the National Institute for Automotive Service Excellence—an organization responsible for certifying technicians in vehicle diagnosis and repair skills and for accrediting automotive-education programs—have developed partnerships to encourage and help potential technicians to join the industry. The Lincoln Technical Institute—a national vocational school offering programs in automotive technology, HVAC repair, applied health sciences, and other hands-on disciplines—has linked up with Audi, BMW, and Fiat Chrysler. Robert Paganini, president of LTI’s Mahwah, New Jersey, campus, says that the majority of students who participated in its prestigious Audi apprenticeship, which adds an extra two months onto a 13-month program, found jobs within the VW Group after graduation. But participation in a manufacturer-specific program isn’t required for job placement. 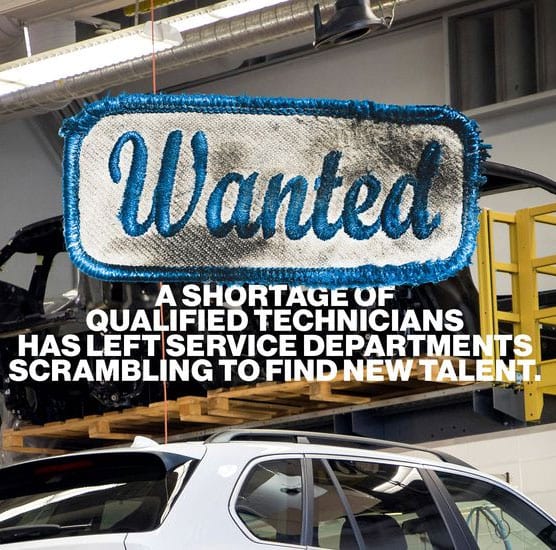 Check Out Our Reviews

SHOP FOR TIRES
CALL US
DIRECTIONS